The sixth book in my Rodeo, Montana, series is available now in bookstores and at online retailers!!! 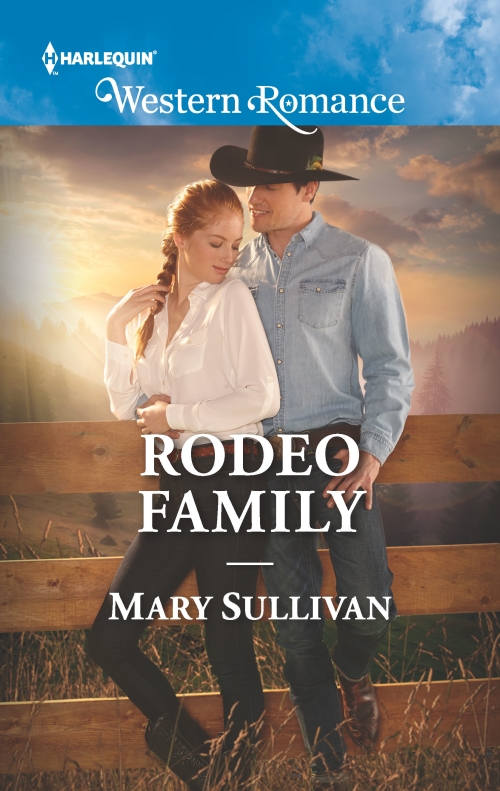 If you’ve been waiting for Nadine and Zach’s story, here it is:

Journalist Nadine Campbell set out to write a feel-good piece on Rodeo’s own rancher Rembrandt, Zach Brandt—not a sensational exposé. She’d come back from New York to heal, not hurt. And Zach and his adorable twin boys were helping more than she’d ever dreamed possible! But a feel-good piece wasn’t about to save her job.

Zach didn’t want to be interviewed. But he did want Nadine. Always had, ever since high school. Back then, he couldn’t compete with the journalistic ambition he knew would take her away. Now that she’d returned, he had a second chance—and he wasn’t about to squander it. Opening up to her was a risk worth taking. Or so he thought…

Join the conversation on my FB author page: https://www.facebook.com/marysullivanauthor/

RODEO BABY is in bookstores now and available online:

CUTEST COVER EVER!!!! This is the third in my Rodeo, Montana, series.

RODEO FATHER: “I loved these characters. Neither Rachel nor Travis has had an easy life but neither is wallowing in self-pity. This is especially true for Rachel who, because of her circumstances, certainly would be justified in a good melt-down. Both are good, caring people who put others before themselves. Their actions speak louder than words and show their true character. Though Travis could have easily become the knight-in-shining-armor rescuer of the story, Sullivan keeps these two on an even keel with “rescuing” on both sides which it made it all the more enjoyable and satisfying in the end. It should be noted that I’m a pushover for adorable kids and Rachel’s daughter is one of the best. She plays a vital role in this story, capturing many hearts, mine included.” TheRomanceDish

RODEO RANCHER: “Sammy breathes life, hope, and fun into the hearts of Michael and his children but he returns the favor by by bringing love and stability to Sammy and her sons and helping them heal the hurts of the past. I cheered for this couple and this family every step of the way. These are people who deserve love and happiness. I appreciate the gradual hand Sullivan took with their relationship. It’s realistic, with steps forward and back, and, just like Sammy, left me singing a happy tune at the end.” TheRomanceDish

A WONDERFUL review for RODEO RANCHER from Books and Spoons:

LOVE (!!!) this review of Rodeo Rancher on HARLIE’S BOOKS…

“Ms. Sullivan painted a picture for me and I’m still smiling.”

RODEO RANCHER, the second novel in my Rodeo, Montana, series will be in bookstores on March 1st…

…and is available for pre-order now!

Visitors are rare at widower Michael Moreno’s ranch. When Samantha Read and her two sons turn up seeking shelter in a snowstorm, his kids are ecstatic. Michael is less enthusiastic. Sammy’s sophisticated city vibe seems out of place in his country home. But even he can’t deny that the bubbly beauty lights up the whole house.

Though Sammy doesn’t know much about ranching, she recognizes an aching heart when she sees one. Michael and his kids could use some cheer, and she’s determined to make the most of their time together. But as the heat between Sammy and Michael threatens to melt the snow, Sammy wonders if Michael’s heart could be thawing as well…

Sammy caught her breath and stared at him.

Michael hadn’t meant to sound harsh. He’d been making a joke. He might not want her here, but he didn’t willingly hurt others. He was about to open his mouth to apologize when she burst into laughter.

“Travis says that exact same thing to me all the time. He says I’m long on air and short on content.”

Her smile, like the heavens bursting forth with a hundred Jacob’s ladders, turned his guts to pudding.

He didn’t know her, hadn’t met her before this afternoon, and already she turned him inside out.

It was going to be a long night.

RODEO FATHER, first in the Rodeo, Montana, series is getting stellar reviews! 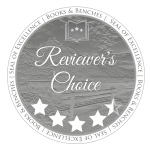 “A charming and heartwarming story of hope and unexpected love…any author who can keep me interested and invested in the characters enough to finish a book in one day did a good job.” BOOKS AND BENCHES, 4 1/2 stars, Reviewer’s Choice Seal of Excellence

“I adore this story for so many reasons…This story pulled my emotions with its engaging plot, characters that were so easy to like and relate to, life situations that many can refer to in their own life, yet the story had the kind of fairytale-like glow, serendipity that can only happen in romance novels keeping the swoon factor high, and smile on the reader’s face. An inspiring and heartening tale, indeed.” BOOKS AND SPOONS, 4 spoons

I’ve been waiting for my FIRST Harlequin Western Romance cover and…here it is! I LOVE it! The little girl is adorable.

RODEO FATHER is due for a January, 2017, release

Travis Read never wanted to settle down anywhere—with anyone. He’s in Rodeo, Montana, just long enough to fix up a house for his sister and he’ll be on his way. Then he meets Rachel McGuire. Beautiful and kind—and with magnetic whiskey-colored eyes—Rachel is everything that Travis could want. Except that Rachel is also very, very pregnant.

A struggling widowed mom, Rachel wants to give her family the stability she’s never had. Travis dashed those hopes by buying her dream house. Okay, she can start over. But she wasn’t counting on such a fierce attraction between them. And this cowboy was never meant to settle down…

Harlequin has bought two manuscripts for their American line! In July, it will be rebranded as Harlequin Western Romance, an exciting change! RODEO FATHER will be out in January, 2017, and RODEO RANCHER, in March. SO happy to be writing in two categories for Harlequin!!!

Harlequin has done an amazing job again of delivering a wonderful cover for my April release! CODY’S COME HOME is available NOW at Harlequin, Amazon, Barnes and Noble, and Kobo.

Amazing review by PJ on The Romance Dish: “…the first of Mary Sullivan’s books that I’ve read. It won’t be the last…If she writes it, I’ll be buying it.”

Former love…danger…suspense…redemption…and the cutest little three-year-old who will vie with Cody to steal your heart!

BACK WHERE HE BELONGS…

Bad choices have dominated Cody Jordan’s life since leaving home ten years ago. Grieving a broken marriage and the death of his baby, he’s back in his hometown of Accord, looking for redemption and a fresh start.

Old friend Aiyana Pearce and her little girl are a breath  of fresh air. Aiyana quickly steals his heart. Being with her reminds him of the man he once was and could be again. Cody’s not ready for a relationship, though—not yet. But when a threat to Aiyana’s life resurfaces, putting his heart on the line is the least of his worries.

My September, 2015, Superromance cover. Love it!

Community service never looked so good
Monica Accord knows trends, not tractors…fashion, not fertilizer. But she’s stuck working on Noah Cameron’s farm after one mistake lands her with community service. Monica remembers Noah from high school, but she definitely never knew about the crush he had on her. Now it just feels as if she’s some bothersome city slicker.
Yet she soon realizes there’s more growing between her and Noah than just crops—a lot more. As long as the revelation of a family secret doesn’t ruin their chance  of a lifetime…

Wheeeee! Last year’s Superromance, ALWAYS EMILY, is a finalist in the Gayle Wilson Award of Excellence contest! I am absolutely thrilled!

Check out the other wonderful finalists:

Authors spend an inordinate amount of time working in isolation, never really certain how their next story will be received. Being a finalist in a contest is a wonderful affirmation, a sign that the writing is heading in a good direction!

It’s November 4th, 2014 and I’m tooting my own horn! USA Today has chosen NO ORDINARY HOME as one of three must-read romances. I am thrilled!

From the review: “NO ORDINARY HOME is no ordinary story. It’s powerful and profound, and altogether lovely…this is one riveting romance, wrapped up with a super-gratifying HEA.”

Follow this link to an interview on USA Today:

My books started with a series about a small town named Ordinary, Montana, in which a rancher named Hank Shelter owned a ranch called The Sheltering Arms. In NO ORDINARY COWBOY, Hank brought inner-city children to his ranch to recover from the trauma  of having had cancer. Always, he sent each child home with a small white Stetson. Over the years, that amounted to hundreds of children, who remained devoted to him throughout their lives.

The heroine, as could be expected, comes to the ranch to tell him he doesn’t have enough money to keep the ranch going, so he must sell, which breaks his heart. The story is about their struggle to come to terms with vastly different philosophies.

This month, Harlequin has re-released that first Superromance in their Western Romance Collection, with a brand new, very lovely cover. 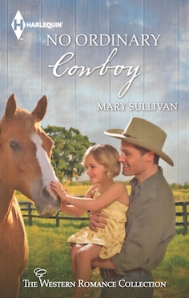 There’s an excerpt from NO ORDINARY COWBOY below.

Amy saw Hank outside her window with his hands cupped in front of him. His shirt and pants were dirty and wet, as though he’d been lying in mud and water. A moment later, she understood why. He squatted in front of the toad house in the garden, the one about which little Cheryl had been so curious. Hank set a toad down on the soil then placed the toad house on top of it.

Amy stretched her neck to watch as he snuck around the front corner of the house.

She heard the front door open.

Amy tiptoed to her door and peeked out. Hank stood in the hallway. The kitchen door opened and Cheryl came out in her miniature overalls. Hank scooped her into his arms and grinned. His eyes crinkled and his cheeks broadened, framing his white, white teeth. Hank had a smile that could light airport runways.

Something happened in Amy’s chest, a bubble rising from somewhere near her solar plexus.

Carrying Cheryl to the front door as though she were a rare hothouse flower, Hank exited the house, saying, “I got a surprise for you, darlin’.” The bubble rose a little higher in Amy’s chest.

She ran to the window and waited for them to round the corner of the house, her heart pounding an odd skipping rhythm.

Hank set Cheryl on the ground in front of the toad house, then knelt beside her.

“Crouch down here and I’ll show you something.”

Amy had trouble swallowing around the bubble that had risen into her throat.

Hank picked up the toad house. The toad hopped out. Cheryl screamed and jumped against Hank, grabbing him around the neck.

He laughed. “This little guy won’t hurt you.” He took Cheryl’s hand in his own and placed it on the toad’s back.

“He feels cool.” Cheryl’s voice shook, with fear or fascination—Amy wasn’t sure which—but the child didn’t pull her hand away. She kept it on the toad’s back, tucked under Hank’s big palm.

Amy thought she could almost feel Hank’s hand on top of her own, the surrounding safe warmth of it, the rough calluses, the dampness from the June heat.

The bubble rising in her burst out of her in a joyful laugh. Hank looked up at the open window.